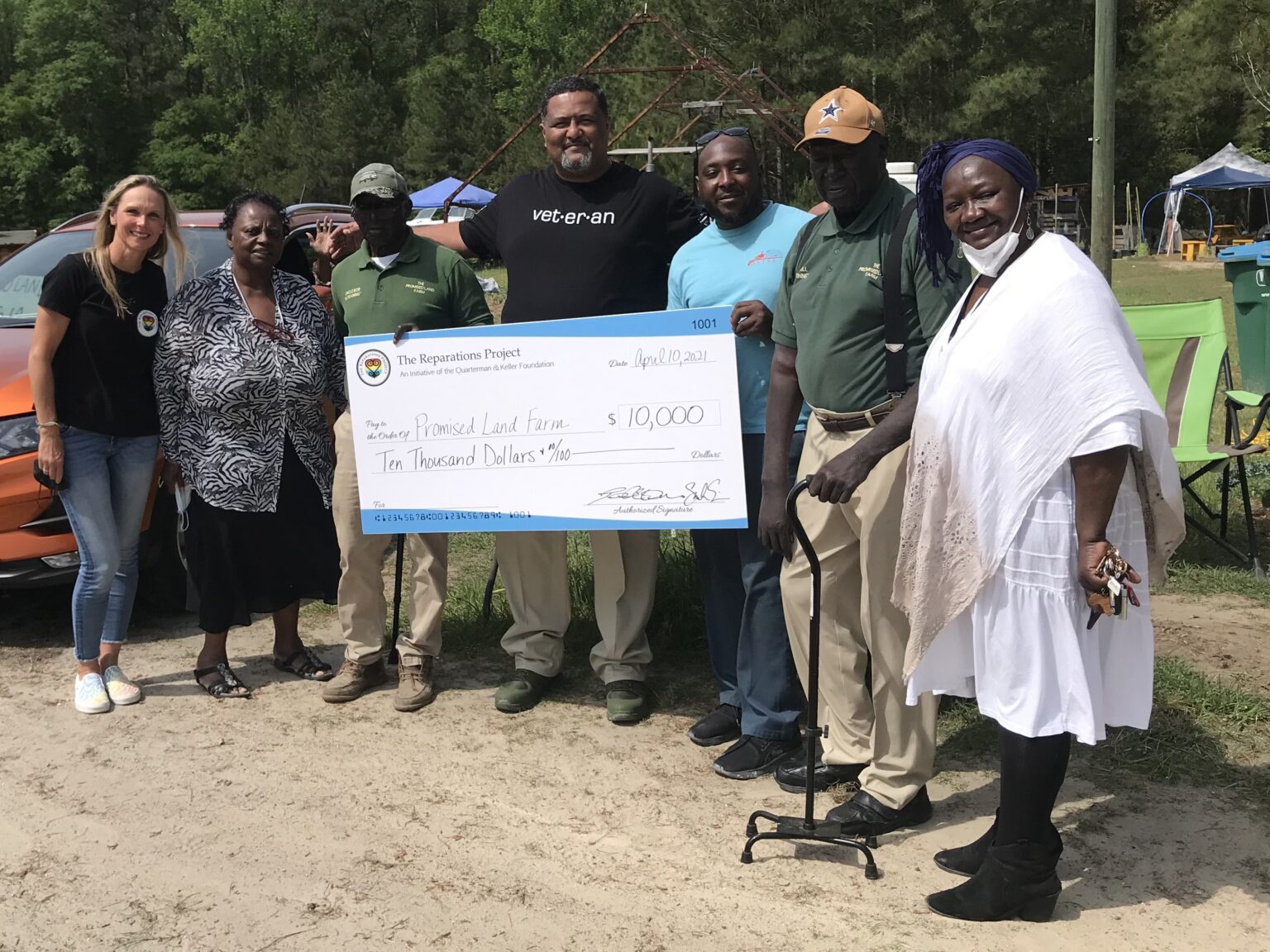 The Reparations Project was thrilled and honored to pay $10,000 in reparations, part of our larger initiative and reparations fund for descendant families in Port Wentworth, Georgia, to Bob and Bill Johnson, who own and operate Promised Land Farm. Promised Land is one of very few Black-owned farms in Chatham County, Georgia.

We would like to extend a special thanks to our cultural advisor in Georgia, Patt Gunn, President of The Center for Jubilee, Reconciliation, and Healing, Inc. of Savannah, Georgia.

Support this work and contribute to the fund here.

The Johnson brothers are both in their 70’s and unable to work the fields as they used to, growing greens and melons for the community, and often giving the food away for free. Today, young school children come to work on a plot off to the side of the 31-acre farm, to learn the old ways of farming without pesticides, to put their hands in the earth.

Local lore says at the end of the Civil War, the Promised Land was given to the formerly enslaved Roderick Steele. During the Civil War, Steele and other enslaved African Americans brought water to Union forces during Sherman’s march of destruction through Georgia to the coastal city. The land was given to Mr. Steele and kept by the Steele descendants until they sold it to the Johnson brothers in 1998. Promised Land Farm, like all privately owned land in Port Wentworth, is threatened by rising tax rates and development. All land in Port Wentworth is also promised land.

If reparations are due anywhere, they are due here. What is now Port Wentworth, Georgia was originally part of several colonial plantations including Mulberry Grove where, in 1793, Eli Whitney invented the cotton gin, an invention that revolutionized agriculture and the economy of the South and the entire nation (to the benefit of White people), while further entrenching the institution of slavery and harm to Black communities. General William Tecumseh Sherman burned Mulberry Grove to the ground during his “March to the Sea” through Port Wentworth in 1864, and also marched through sprawling farming plantations along Meinhard/Monteith Road, the site of an 1864 battle between Confederate and Union troops. After the Civil War ended in 1865, and while he was in Savannah, Sherman helped negotiate an attempt at land reparations for newly emancipated African Americans with what is commonly referred to as Sherman’s Field Order No. 15. At least 40 acres of abandoned and confiscated land was promised to each formerly enslaved family so that they might begin to build generational wealth through land ownership. Land in this area was distributed to African American families in an attempt at reparations, then it was rapidly reclaimed.

But this farm was special. It stayed. We hope this money helps the Johnsons keep it that way. The Reparations Project also hopes to identify other descendant families in Port Wentworth, and to open the conversation about reparations in the area and what else might be possible to work together to do.