“In today’s America, we tend to think of healing as something binary: either we’re broken or we’re healed from that brokenness. But that’s not how healing operates, and it’s almost never how human growth works. More often, healing and growth take place on a continuum, with innumerable points between utter brokenness and total health.”
-Resmaa Menakem, “My Grandmother’s Hands: Racialized Trauma and the Pathway to Mending Our Hearts and Bodies”

At its heart, reparations refers to compensation, which might include a national apology, educational, housing, and healthcare programs, and financial redress from the U.S. government to African-Americans for the harm of slavery and beyond. H.R. 40, which has not yet been passed by Congress, would establish a commission to study and develop national reparations proposals.  Legislation that begins this process cannot be passed soon enough.

We believe that the process of truth telling, redress, and healing must also happen on a personal level in addition to a national level, and in fact that national reparations can be influenced in this way. Relationships between members of different descendant families, people who are descendants of the enslaved and of enslavers, and also beyond slavery, people who are members of the caste that has been systemically oppressed and also the caste that has been systematically privileged, are foundational if we really want to heal our national wounds and work toward closure.

Video Image: Patt Gunn of The Savannah Gallery of Slavery and Healing helps Sarah pay tribute to Ms. Rachel Butler, a formerly enslaved woman in the Keller cemetery at North Salem Church in Port Wentworth, GA. Sarah is searching for Ms. Butler’s descendants so she might eventually rest with them.

When 250 years of chattel slavery ended, the oppression of Black people did not.

America’s caste system was set. Discrimination continued in jobs, housing, education, and incarceration — barriers that have
contributed to the staggering economic inequality that persists in the country today. 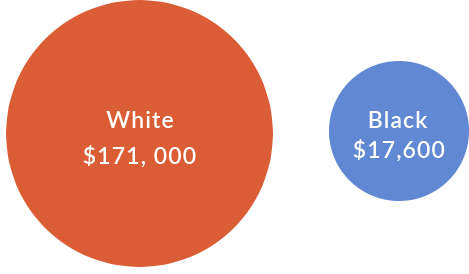 What is the Wealth Gap?

Today, the five largest landowners in America, all white, own more rural land than all of Black America combined. Black people make up about 13 percent of the population of America but own less than 1 percent of rural land. White people own more than 98 percent of the land in the country. In 1962, two years before civil-rights legislation and the Great Society program, the average wealth of white households was seven times greater than that of Black households. Today, it’s ten times greater. The median family wealth for white people is $171,000, compared with just $17,600 for Black people. It is worse on the margins. According to the Economic Policy Institute, 19 percent of Black households have zero or negative net worth. And, at every level of the wage distribution, median Black wages are 73.3 percent of white wages (“State of Working America Wages 2018,” Economic Policy Institute).

When the Civil War ended in 1865, an attempt at reparations, commonly referred to as Sherman’s Field Order No. 15, was made to give at least forty acres of abandoned and confiscated land as well as a mule to each formerly enslaved family of four (or ten acres per person) so that they might begin to build generational wealth through land ownership. Land was distributed to African-American families, then rapidly reclaimed. Instead of working their own land, the Black Codes condemned many African-Americans to cheap or unpaid labor as sharecroppers and paved the way for the wealth gap today.

“The Case for Reparations” Ta-Nehisi Coates, The Atlantic, 2014

“From Here to Equality: Reparations for Black Americans in the Twenty-First Century” William A. Darity featured on NPR

“H.R. 40 Is Not a Symbolic Act. It’s a Path to Restorative Justice.” Rep. Sheila Jackson Lee

“Germany confronted its racist legacy. Britain and the US must do the same.” Susan Neiman, author of the book: “Learning from the Germans: Race and the Memory of Evil”

“Reparations: How We White Relatives Must Try to Pay Back the Unpayable Debt.” Hilary Giovale, organizer and author of Good Relative